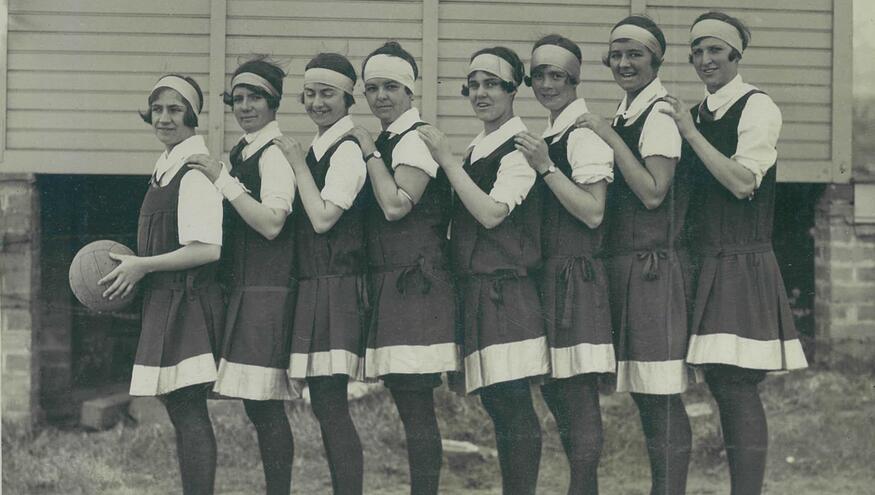 Netball at the University of Melbourne is celebrating 100 years in 2020. Encompassing the Melbourne University Netball Club, intervarsity competition and more recently, our high-performance MU Lightning program, the University has the longest continually run netball program in Victoria.

While COVID-19 has called ‘obstruction’ on everyday life in 2020, we are planning to celebrate 100 years of netball with an event befitting the milestone once social gathering restrictions permit. For now, and over the next few months, we look forward to reminiscing on the beginnings of netball at the University, intervarsity and club highlights, the women who have contributed so much and the friendships that have been forged over the past century.

In the Beginning: Netball at the University of Melbourne

Arguably Australia’s most popular women’s sport, netball has had a long and proud connection with the University of Melbourne. From pioneering players, to key administrators and coaches, state and national representatives, to today’s participation and high-performance programs, it’s fair to say our netball community has been a significant contributor to the sport in Australia as we celebrate 100 years of netball at the University of Melbourne.

In the beginning, the sport was originally called ‘women’s basketball’ and originated as a form of non-contact sport for women (it would take some four decades before the sport eventually adopted netball as its moniker). The sport had been established just before the First World War in Melbourne schools, and the Melbourne University Basketball Club was established in August 1920 for female students who’d played the game at school and wished to continue in the sport. In 1921, the club was allowed £5 for goal posts, nets and ball. Two University teams began playing in the School Basketball Association in 1922 – the A team was captained by Miss J. Maxwell. Games were played outdoors and as the sport grew, the Victorian Basketball Association was formed. The sport looked very different when compared with today’s game, with interesting playing positions such as ‘full goal’ and ‘help defence’, according to The Argus newspaper of 1925.

Despite unsuccessful attempts to arrange contests in the first few years, in 1925 a University team played their first inter-varsity match against Sydney University on the hallowed grass of the Melbourne University Oval. Melbourne was captained by Miss Beryl Stillard with Miss B. Hasings her deputy – with the team’s well fought out win (Melbourne won 24 – 10) perhaps setting the pace for a successful century for the women’s netball on campus. Melbourne next played against Adelaide and Sydney (in Adelaide) in August 1926. Marjorie Thom captained the team, however Melbourne lost both games on the account of one of our goal-throwers being restricted through illness. Misses Thom, A. Byatt and E. Hurrey were nonetheless selected in the combined universities team to play the South Australian state team. Melbourne would reclaim the national intervarsity mantle in 1927 and retain the title again in 1928 and 1929 (with Melbourne, Sydney and Adelaide joined at the IV tournament by the University of Tasmania in 1929).

One of the challenges faced in early representative games was that there were no uniform rules, which meant that each state played the game differently. To overcome this, the Melbourne University teams often played half of a game against a team from another state with the Victorian rules, and the other half with another set. Teams continued playing inter-state games under confusing rules until 1960, when the rules were officially standardised and the International Federation of Women’s Basketball and Netball Associations was established.

Lorna McConchie was one of two Australian delegates at the formation of the international federation. McConchie studied physical education and later worked as a course staff member. She represented Victoria throughout the 1930s at the All-Australian national championships and would later serve as the state body’s President intermittently from 1955 – 1981 (after being awarded life membership in 1951). In the years between, McConchie would manage Australian teams and was also Vice-President of the Melbourne University Sports Union. Eunice Gill, a staff member in the then Human Movement department also became a prominent netball administrator in the All-Australian Netball Association. Prior to leading the sport off the court, Gill had been good enough to earn selection as a member of All-Australian teams from 1946 – 1948, including as captain in 1946 and 1947.

Today’s crop of University netball administrators, coaches and representative players also continue to serve the sport. But more on these netball movers and shakers in a later article.

As community sport evolved across Australia, so did student-only intervarsity sport and the Netball Club, which began to provide opportunities for alumni, and eventually a wider cohort of family and friends, to compete under the University’s name. The University continued to be amongst the leading intervarsity teams competing in Australian Universities Sports Union/Federation championships and the subsequent Australian University Games. A University sport scholarship program (now its Elite Athlete Program) began to support talented student netballers from 1995 with a number of students, club members and alumni going on to represent state, country and national league teams ever since. Again, more on these remarkable women in a later article.

The Melbourne University Netball Club, at one point in the early 2000s, was arguably the largest senior netball club in Victoria with some 18 teams playing in the local Parkville competition. The strength of the Club was also reflective of the University’s success in women’s and mixed netball at the Australian University Games. And with the Victorian Netball Association’s shake-up of their State League in 2008, the University considered offers from a number of potential partners to join the new Victorian Netball League – eventually finding the perfect fit with the Western Lightning – to form Melbourne University Lightning in 2014 and becoming the most fertile club nursery in the country for nurturing Suncorp Super Netball players. The participation through high performance netball pathway at the University would now be complete.

From a small group of women playing on the University Oval wearing leather shoes and collared shirts and ties, to 100 years later, where players now run around in University-branded A-line body suits in specifically designed on-campus facilities under the tutelage of some of Australia’s best coaches and administrators. Netball has provided countless women at the University with friendships and experiences that have, and will, last a lifetime. In the beginning, 100 years ago, could any of those pioneering netballers have dared to dream that netball at the University of Melbourne would become the longest running, continuous netball program in Victoria, and possibly Australia. One can only wonder.

We are looking to reconnect with all past players, intervarsity athletes, club members, office bearers, volunteers, coaches, and officials to share memories of your time playing netball for the University. Whether it be photos, team lists, stories of your family or of your own experiences, we would love to hear from you via the link below: