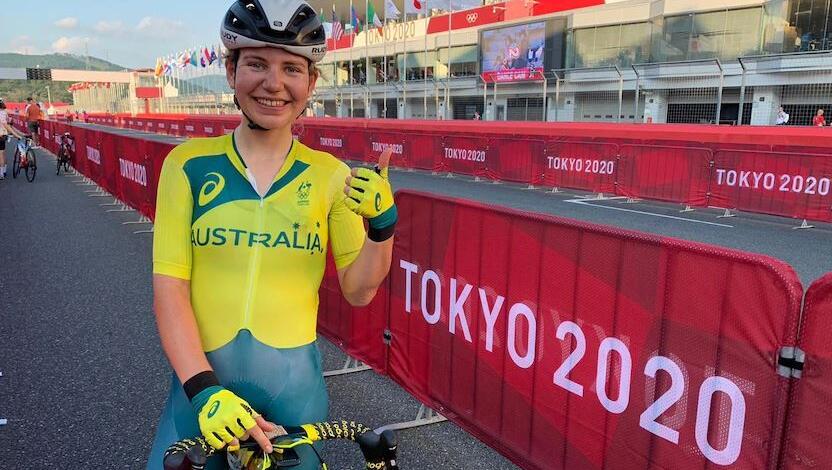 Sarah Gigante is learning Spanish, and having just celebrated her 21st birthday, the prodigious cycling talent compares it to a steep ascent.

"I know 'nada'," Gigante laughs. Which in Spanish means "nothing".

It's more a reflection of her humility.

When she was 18, Gigante recovered from a big crash to be crowned the 2019 Australian road race champion, while achieving a high school Australian Tertiary Admission Rank (ATAR) score of 99.95.

Gigante then won consecutive national time trial championships (2020 and 2021), while studying a Bachelor of Arts in Linguistics and Geography at Melbourne University.

In April 2021, the Team TIBCO-Silicon Valley Bank rider overcame another serious crash to compete at her first Olympics in Tokyo.

Gigante is now eyeing another childhood dream — one which for so long seemed impossible.

She'll head to Spain racing for a spot in the first-ever women's Tour de France Femmes in July next year, after signing a three-year contract to join the Spanish women's team, Movistar, from 2022.

"I remember when I was at school all my friends would ask if I was going to one day race the Tour de France," Gigante says.

The women's version of the Tour de France will start in Paris, on the same day the men's Tour finishes, covering 1,029 kilometres and eight stages.

The team will choose its strongest six, with Gigante among many riders fighting for a spot.

"I really hope I get selected. I'd love to be Annemiek's domestique," she says.

"I think she [Annemiek] would be able to take home the win."

Domestique refers to a rider who works to benefit their team and leader, rather than trying to win the race.

For Gigante, there will be some races beforehand, including the Belgian Classics, that will help determine if she's selected for the Tour de France Femmes.

"If I'm not part of the strongest six, I'll be watching and cheering," she says.

"Actually, I won't be watching and cheering, I'll be grovelling, but I'll try my best."

Not so smooth ride to the top

Despite her phenomenal talent, Gigante's journey hasn't been a smooth ride.

Crowned the 2018 national junior champion in the road race, individual time trial and criterium, she had a horror crash in May of that year, breaking her shoulder, elbow, and wrist during a club road race.

She had stitches in her mouth and had to be spoon-fed for weeks.

She went on to win silver in the junior track worlds and women's points race.

Three months out from the Tokyo Olympics, Gigante had another nasty crash, during the Flèche Wallonne Feminine, a road race in Belgium.

"I broke my elbow, my fibula in my leg and my collarbone," she says.

"I needed surgery on the collarbone, which was in more than five pieces, so it was pretty nasty."

Unable to train, her Olympic debut appeared in tatters.

Despite the extent of her injuries, Gigante used the Tokyo Olympics as motivation towards her recovery.

She went on to finish in 11th place in the time trial and 40th in the road race.

"It was so special just to get to the Olympics," she says.

"Being able to compete on such a huge stage was an honour."

But there are many challenges for young female riders like Gigante as they bid to turn professional.

"It's quite a tough sport to get into, especially financially, you need so much support," Gigante says.

One of the other big issues has been gender equality.

"Equal sponsorship isn't there yet because not all our [women's] races are televised."

Some categories are missing altogether.

Unlike the men's, there is no under-23 women's category at the UCI Road World Championships, denying female riders like Gigante crucial opportunities.

With the Tour de France being a male-only event since its inception in 1903, the world's top female riders have been competing in La Course, a one-day race which was created in 2014, following a petition to Amaury Sport Organization (ASO) calling for a women's Tour de France.

A women's Tour de France was held between 1984 to 1989 but wasn't on the same level as the men's in terms of sponsorship and broadcasting.

A new era in women's cycling

After years of female cyclists calling for a women's version of the men's TDF, it's finally happened.

The eight-day event is set to become the richest race in the women's peloton, with a total of just over $390,000 up for grabs, including $78,000 for the winner of the yellow jersey.

It's still significantly less than the men's, where the yellow jersey winner earns around $780,000.

He believes enabling women to race on the world's biggest stage will catapult women's cycling.

"The first question I'd get asked about my professional cycling career is, did you ride the Tour de France?" Sulzberger says.

"That's the question in front of the Olympics and Commonwealth Games, and that's the opportunity which now presents for the Tour de France Femmes."

Sulzberger is the senior country manager of Zwift Australia and New Zealand, an online fitness platform that has signed a four-year partnership to sponsor the Tour de France Femmes.

"It's really important to have parity there for the men's and women's races," he says.

"There was a lot of work with the ASO body of the Tour de France to work towards achieving that with the broadcasting and paving a new way for women's racing."

Sulzberger says the real race will mark another significant step.

"The Tour de France has iconic jerseys, having the yellow jersey is something that's very famous."

"By evolving the women's one-day race [La Course] into that Tour de Femmes, it could become as iconic as the men's."

For Gigante, the chance to finally race cycling's holy grail has been a long time coming.

"Going to the Olympics was always my childhood dream but now that there's a [women's] Tour de France, I think it would be hard for female cyclists to pick," she says.

"I mean, doing both would be awesome."