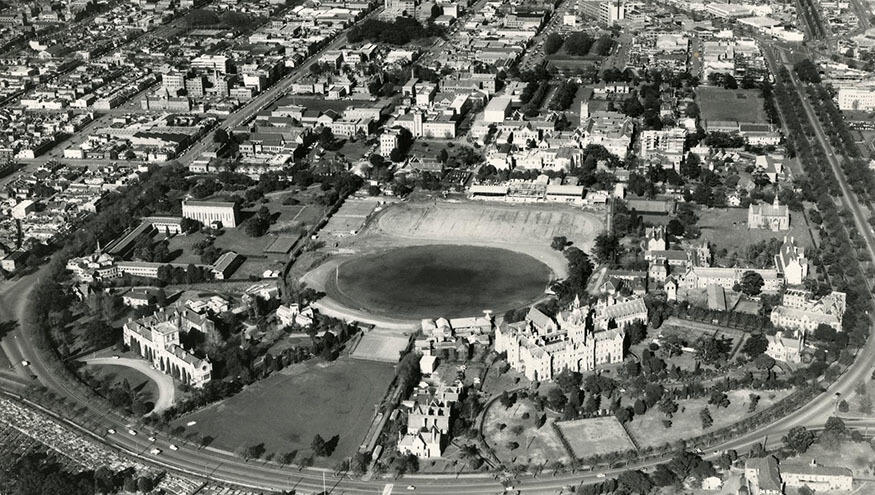 Students have participated in organised sport and recreation activity since the formation of the University in 1853.

Students returning to the colonies from Eton, Harrow and the famous Rugby School brought back the prevailing wisdom dominating the British public school system: Mens sana in corpore sano (a sound mind in a healthy body).

Sport has always held a special significance in the life of the University through the performance of its sporting clubs, teams and student-athletes, and in the vast array of sporting programs and facilities that provide students and staff with an outstanding campus experience.

Students have participated in informal and organised sporting and physical recreation since the formation of the University in1853. They came together to form clubs and teams to compete in weekly or regular community competitions, with the first recorded contest, a cricket match in 1857. Our sporting clubs evolved to become some of the pre-eminent university sporting clubs in the country.

Intervarsity sport followed in 1870 and the University soon adopted the British practice of awarding sporting “Blues” for outstanding performance. In 1874, the land north of Tin Alley, the Sports Precinct, was provided to the University for recreational purposes, with the original pavilion built in 1906. The Boat House was constructed on the Yarra River in 1908.

In 1904, the governance and management of sport at the University broke away from the Students Union with the establishment of the Sports and Physical Recreation Committee and the Sports Union, with the first Director of Sport appointed the same year.

Intercollegiate sport was established in 1921 and now involves hard-fought competition between 12 residential colleges with many finals – in particular, the rowing regatta on the Yarra River – attracting colourful and vocal supporters. After the Second World War, the arrival at the University of returned servicemen and the children of post-war migrants led to the introduction of new activities such as Fencing, Judo, Badminton, Basketball and Soccer. Many of these could not be accommodated on campus and required access to sporting grounds and facilities in Princes and Royal parks, as well as facilities within the local community.

In 1954, the Beaurepaire Centre was built with the generous support of Olympian and former Melbourne Lord Mayor Sir Frank Beaurepaire, and the first hard-surface
running track was laid. The Sports Centre was developed in 1967, providing opportunities for the development of indoor sports on campus as well as weight training
and general fitness programs. The building of the Ski Lodge at Mount Buller and the mountaineering hut at Mount Feathertop in the 1960s reflected an expanding interest in alpine sports and bushwalking.

Franz Stampfl arrived in 1955 to teach physical education and successfully coach a generation of student-athletes, many of whom represented Australia, including
1968 Olympic gold medallist Ralph Doubell. Some of Australia’s most successful athletes have been students at the University, many of whom have gone on to be significant community and industry leaders. Alumnus include Second World War hero and humanitarian Edward “Weary” Dunlop, the first Victorian-born rugby player to represent Australia, and Olympian and former Governor of Victoria John Landy, to name but two.

The stand-alone intervarsity model was replaced by the emergence of the Australian University Games (AUG) in 1995 and the University has taken out the title of Overall University Champion six times, most recently in 2013. In 2009, the tradition of head-to-head competition was revived with the Australian Boat Race (ABR), reigniting a long-standing rivalry with Sydney University that has become an important annual event on the University calendar.

A significant upgrade of the Beaurepaire Centre was completed in 2006, incorporating a refurbishment of the pool and extensive strength and cardio-training
areas. Two group fitness rooms were also established in the Sports Centre, significantly increasing the participation of female students. The Lincoln Square Fitness
Centre opened in 2011 to accommodate the growing campus population south of Grattan Street.

The Boat House was extended and a function space added in 2009. Shortly after, the northern end of the Sports Centre was remodelled, and the building renamed in
recognition of a significant gift from Nona Lee. The new pavilion was opened in 2014 and named in honour of long-serving head curator Ernie Cropley at the request of the many generous benefactors who made the development possible.

In 2009, the Sports and Physical Recreation Committee were replaced by a University appointed board to advise the University Council on sport and recreation strategy and policy. The move reflected the increasing complexity and scale of sport, fitness and recreational activities at the University, as well as the level of professional management and oversight required. In 2018, the University adopted a charter that outlines the mission and purpose for MU Sport along with the governance and management arrangements.

Students have traditionally contributed to the cost of participation through compulsory student fees and the payment of participation, entry or membership fees.
The University funded sport directly during Voluntary Student Unionism (VSU) between 2007 and 2011, before a Student Services and Amenities Fee (SSAF) was reintroduced in 2012. The SSAF allocated to MU Sport is directed to support student sporting activity, provide direct and indirect support to sporting clubs and to maintain the University sporting facilities and grounds.

The University of Melbourne has a proud tradition of providing students with quality programs and facilities that foster participation, volunteerism and community
leadership, nurture sporting excellence, and support exceptional athletes. It aims to continue to build on this legacy.

For the comprehensive history of sport at the University of Melbourne, see The Ties that Bind by June E. Senyard.