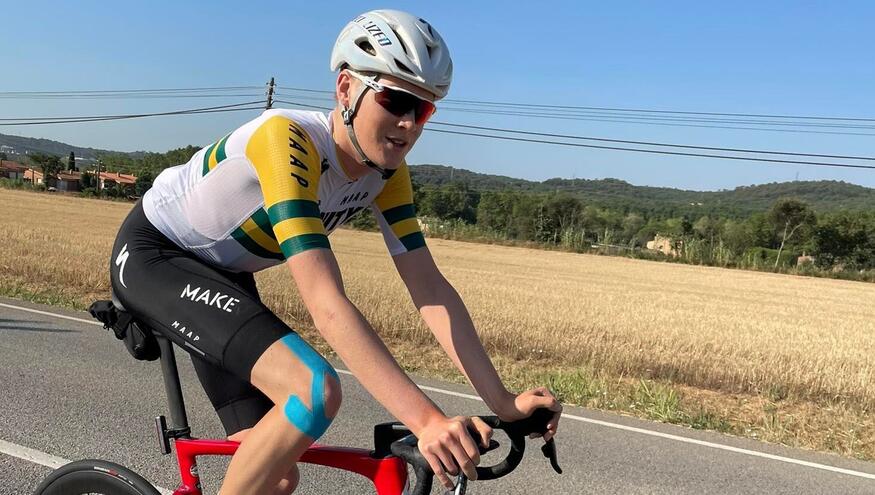 by Tom Benton, Bachelor of Commerce and Friends of the Sports Association Scholar 2021

With the start of my season starting on such a high, carrying on like this would unfortunately not become a reality.

With thanks to the relationship of my Australian team Inform TMX Make had with the UK registered continental team, I had the opportunity to head to Europe to continue my season there. Flying over in mid-July, my season was largely supposed to be based in Belgium, with other races having pending selection based on performances.

I would spend my first few weeks in Girona making the most of the ideal training setting and warm weather. From here I found myself in Belgium for the next month racing in a block of 1.1 and a 1.pro UCI one day races. Being able to line up in such races and racing alongside some big teams was quite the experience, and unfortunately, the experience was the only positive I could gather from these races. With a rather frustrating knee injury hindering all training, preparations and my ability to race, this was the underlying theme of my 2021 European trip.

With such dire results, it would see my season end early post the Belgium block, where I began preparing for surgery on my knee, rather than for more races. Having had my original flights home cancelled just like about every Australian, I now sit awaiting for my flight home in late November. For the time being, I have begun my rehab on my knee post-operation and so far everything is going to plan so I can come back stronger in 2021.

Huge thanks to the MU Sport team, Brendan Parnell, Tony Sephton, Rod Warnecke for all of their support during this year, also huge thanks to Mucyc Cycling Club , for their continued support.