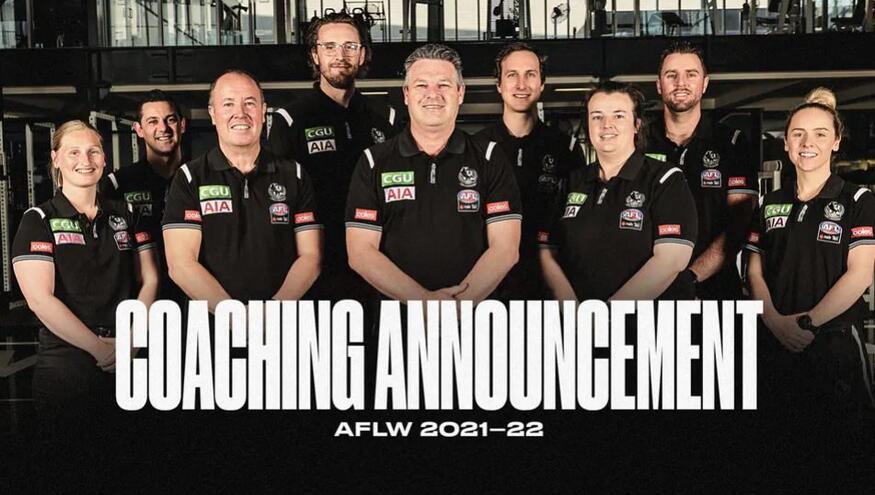 Collingwood has three new additions to its coaching panel for the 2022 AFL Women’s season.

Chris Gamble has joined the club as an assistant coach with the responsibility of the backline, while Jason Brown has stepped into the role of assistant coach and will oversee the forward group. Martha Cantwell will also support the program as a development coach.

Gamble joins the Pies following three seasons as an assistant coach with Frankston’s VFL side. He served as head coach of the Royal Australian Navy men’s team during the 2020 and 2021 seasons and also led the Cerberus’ men’s team in the Southern Football League in 2018.

With over 18 years’ experience in the Australian Navy, Gamble arrives at the Holden Centre on a full-time secondment opportunity from the Australian Defence Force.

Brown returns to the Pies’ program having served as a runner and skills coach during the 2021 campaign.

He was also as a mid-field coach with both Melbourne University and North Melbourne’s VFLW programs across the 2019 and 2020 seasons. Brown has also been heavily involved with Diamond Creek in the former VWFL and VFLW competitions as a development and assistant coach and managed to take the club to three grand final appearances throughout his time.

Cantwell has spent the last two seasons with the Melbourne University Football Club as co-coach of the senior women’s team and has also worked closely with NAB League Girls side, Calder Cannons as an assistant coach.

Last season, Cantwell was given an insight into the high-performance space having taken part in Collingwood’s AFLW Coach Acceleration Program.

The Pies’ head coach Steve Symonds will again be supported by senior assistant Scott Gowans who has responsibility of the mid-field.

Jordan Roughead, who plays for the club’s AFL side, will return as a specialist coach, while Chloe McMillan will continue in her dual role as an AFLW development coach whilst continuing as the club’s VFLW head coach.

James Debono will continue to support the program as a specialist coach until his secondment with the club concludes after the Christmas break.

Symonds believes the coaching panel is experienced and has a diverse set of coaching skills.

“We’re thrilled to have Chris, Jason and Martha on board with us for the upcoming season,” Symonds said.

“Chris brings a broad range of skills both within football and with 18 years’ experience in the Navy, while Jason and Martha already have strong connections with our staff and playing group having previously been involved in the program.

“Scott, Jordan, Chloe and James are much-loved members of our club, and their continued involvement provides great consistency for the program.

“With a wealth of experience across the coaching group, we’re well-positioned with dedicated staff not just amongst our coaching panel but also in high performance.

“After another strong season in 2021, we hope we can take our game to the next level this season and with the coaches we have, we are best positioned to achieve success.”