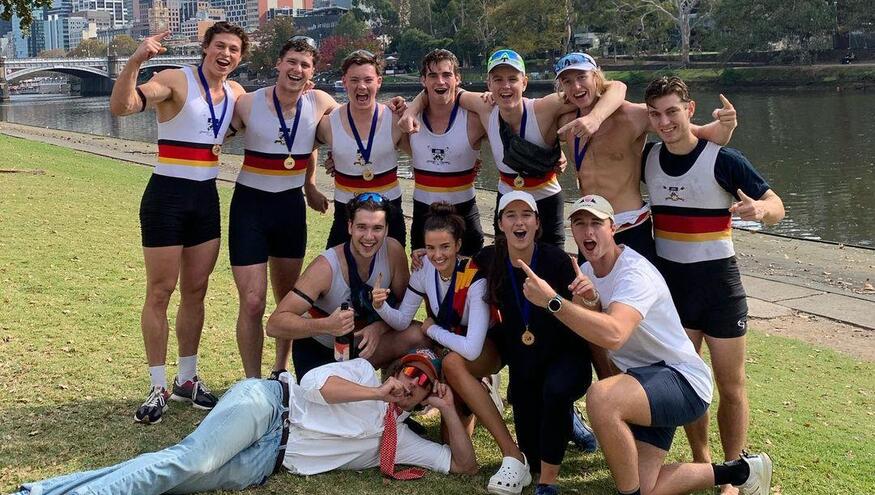 On Saturday 1 May the Yarra River played host to the 140th edition of the College Rowing Regatta. The warm weather and calm waters provided excellent conditions as spectators flocked to the banks of the Yarra for the year’s biggest Intercollegiate event.

Competed over 800m, the Women’s 2nd VIII event was entirely about speed. Captain and stroke seat of the Trinity crew, Millie Friday, lead her crew to a hard-fought victory in the final. Trinity never let go of their early lead and comfortably took Gold. Crossing second, St Hilda’s pulled through in a valiant effort to claim the silver leaving Ormond in bronze position.

The Men’s 2nd VIII, a 1600m event saw Trinity, University and Ormond Colleges make their way into the final. Ormond was able to pull out a come from behind victory, winning by two boat lengths after trailing at the start of the race. This was the 9th consecutive win in this event for Ormond.

In the Women’s 1st VIII final, Queen’s had a fast start but tired shortly after and were unable to match the fitness of the Ormond crew. Ormond crossed the line in first with a clear margin of victory in their 7th consecutive Women’s 1st VIII event. Women’s Captain, Claire Morrison commented that “this year had been a really competitive across both women’s divisions and it was great to see the traditional rivalry between Trinity and Ormond continue in some very close races. You could see all the rowers wanted to put their best foot forward after a short but intense on-water season.”

This story was repeated in the Men’s race with Ormond rowing a technically proficient race to cross the line several boat lengths in front of Queen’s. Commenting on their races, Ormond Captain Seb Francis stated: “both were excellent races! In the heat Trinity got off to a really strong start but the boys did well to hold on and execute our race plan and row through them to claim the win. Queen’s also proved tough competition.”

In addition to the College boat races, this year saw the return of the ‘Big Blue Rowing’ between Monash and Melbourne, racing the 2000m course. Monash fielded highly experienced crews in both the men’s and women’s events and took out convincing wins against their Melbourne University counterparts.

Overall, it was a highly successful event, underpinned by good weather and enthusiastic crowd support. Congratulations to the winning crews form Ormond and Trinity. Additionally, many thanks to the volunteers from Melbourne University Boat Club, who contributed significantly to the running of the event and special mention to Greg Longden and Maddy Goldsmith as the Regatta’s principal organisers.

The Regatta may have been the busiest College Sporting event of the semester, but the competition has been fierce across all sports as the Colleges compete for the Tickner Cup. Results so far: