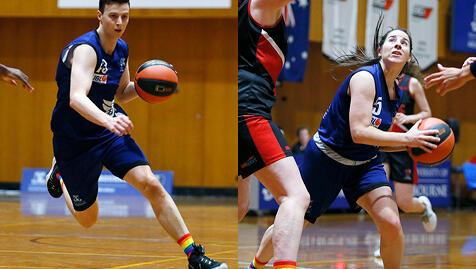 The 2022 UBL season started on the road for Melbourne, with the teams traveling to Ballarat for a round 1 clash with Federation University. The Women's team lost a closely contested game 52-44 (highlights), and the Men's team had a dominant 115-57 win (highlights)

With the first home game of the 2022 UBL season kicking off this week, the UBL coaches shared their thoughts on the upcoming competition and what it means for intervarsity basketball, as well as their expectations for the Melbourne teams this season.

Shawn King, who took over as Head Coach for the Men’s UBL team (and also the Basketball Club's Men's Big V team) looked back on his time growing up in the United States and following NCAA Basketball through his childhood; “I love the atmosphere and rivalries and the excitement of competing (in college sports)”. While he would love to see the introduction of an NCAA style tournament and more athletic scholarships, Shawn remarked on the improved opportunities for Australian student-athletes being offered by UniSport, providing a pathway for collegiate representation in basketball whilst continuing high-level study.

Grantley Bernard continues to coach the Women’s UBL teams after previously leading the squad to multiple Uni Nationals medal finishes. Grantley shared Shawn’s excitement about the opportunities being offered to student-athletes through UBL. While not only providing a potential pathway for further competition in NBL1 or Big V leagues, Grantley hopes the national scale of UBL will provide greater exposure and awareness of the country’s greatest talent, enticing institutions to complement their high-level academics with increasingly strong basketball programs.

Replicating the electric aura of college basketball in the United States is a colossal task, but student engagement will prove a pivotal element of the UBL's ongoing success.

“It’s the most important thing, students are what make it so exciting. The crowd and their ability to give us energy when we need it or to distract the other team… It (makes) the game that much more exciting!”.

Grantley agreed with the need for strong student involvement as a pillar to growing and improving UBL. “Getting students to games to foster ‘university spirit’ is going to be key to its success and popularity for those on and off the floor”. With half-time performances, 50/50 raffles, food and drink, giveaways at the door, and free entry for students, each round of UBL is poised for a strong turnout.

With a strong base of returning players in both the men’s and women’s teams, including 2021 UBL MVP Joel Rimes (Doctor of Philosophy), the University’s squads are well-positioned for competitive campaigns. However, as Grantley explains, individual talent offers little in terms of a strong season; “The foundation of the team’s success must be built on the strength of the group, not the individuals…it will be the depth of the squad… that becomes the most important factor”.

As the League is set to grow with new entrants over the coming years, recruiting the country’s best talent is becoming an important investment for teams that hope to remain competitive in the League. When asked how they would encourage potential student-athletes to attend the University of Melbourne, both coaches offered enticing responses.

For Shawn, the lure of competing and studying at the top university in the country, and a top 40 institution globally, is an opportunity seldom offered to student-athletes, and only adds to the University’s high-quality facilities.

Grantley offered insight into the fun but demanding nature of the women’s program, explaining his desire to coach his players to be able to operate at their peak, on and off the court. The combination of a strong athletics program and the University’s academic prestige only adds to the attractive culture he is building through UBL.

Melbourne's first home games will be held on Wednesday 30 March, with 5 home games scheduled over the next 2 weeks - there is a lot of basketball to come!