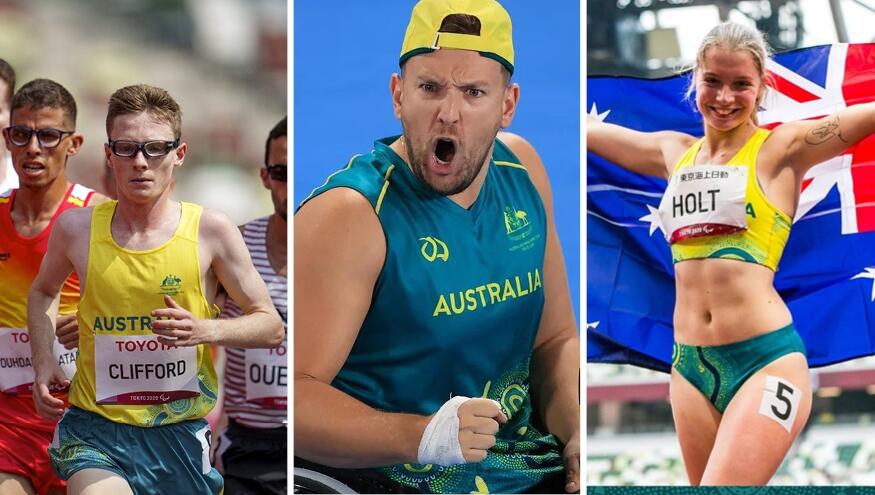 A historic Paralympics saw its conclusion on Sunday with a spectacular closing ceremony sounding off a remarkable Australian campaign.

The University had three athletes compete across Para-Athletics and Wheelchair Tennis, each returning home with multiple medals.

A huge congratulations to Jaryd Clifford, Dylan Alcott and Isis Holt for their incredible performances, and the Australian Paralympic Team for a phenomenal 8th place medal tally of 80.

Arts student Jaryd Clifford returned for his second Paralympics campaign, competing in Rio as an up-and-coming 17-year-old. Come Tokyo, Jaryd was defending two world championships from Dubai 2019 and an outstanding world record during his Marathon debut in April of this year, slashing the T12 world record by two and a half minutes.

Jaryd continued to impress in Tokyo, earning three medals across the Men’s T13 1500m and 5000m, and the T12 Marathon. Perhaps most impressively, Jaryd scored what some dubbed “the greatest Silver medal ever won” in the T12 Marathon over the weekend, earning second-place behind a Paralympic-record performance by Morocco’s El-Amin Chentouf.

Jaryd opened the Games with a Silver in the 5000m and a Bronze in the 1500m T13 categories. Despite his long-held goal of Gold at the Paralympics, Jaryd shared his motivation to pursue the achievement at Paris 2024. However, he conceded it would be hard to surpass the emotions he felt at the completion of his Tokyo 2020 campaign.

"As far as a silver medal goes, it's the greatest silver medal ever won ... Jaryd was throwing up for about the last 10kms."

Commerce alum Dylan Alcott once again delivered a remarkable Paralympic performance, earning both of Australia’s medals in Wheelchair Tennis. Alcott was a clear favourite, entering the Games with only one hard-surface loss in the past two years, competing in both the Quad Singles and Quad Doubles events. The Number One ranked player did not disappoint, beating out World Number Two Sam Schroder in an electrifying showdown. After a near-hour-long first set that saw Alcott claw back from a 5-3 deficit to beat Schroder in a 7-2 tiebreak, Alcott showed out in what we now know was his last Paralympic Games, earning Gold with a 6-1 second set victory.

Winning his first Paralympic Gold in 2008 at just 17 as a member of Australia’s Wheelchair Basketball team, the Rollers, Alcott also helped the team secure their 2012 Silver medal. Following successful tennis campaigns through Rio and Tokyo, Alcott reflected on the role Paralympic sport has played in his life, remarking that it “was the best thing to ever happen to me and I owe it so much”.

The Commerce alum teamed up with Heath Davidson for the Quad Doubles, hoping to recreate their Gold-medal run in Rio 2016. Again facing off against the Netherlands’ Sam Schroder, this time paired with Niels Vink, the Aussies battled back-and-forth through an intense match. The Dutch duo persevered through an intense resurgence from Alcott and Davidson, with a seventh-game break getting supporters watching at home on the edge of their seats. The Netherlands held on to upset the reigning gold medallists in straight sets, winning 6-4 6-3. Alcott and Davidson remain above their rivals in the world rankings despite the loss, sitting at third and fourth respectively, above Vink and Schroder’s fifth and sixth positions.

With Grand Slam victories at the Australian and French Open and Wimbledon, Alcott is looking to retire his Paralympic Career with a Golden Slam, needing a victory at the US Open later this month to secure the feat. Alcott would become the first Men’s player to accomplish the task, not just in Wheelchair Tennis but across all categories of the sport, joined only by Steffi Graf’s 1988 performance.

Alcott begins his US Open journey when the event kicks off this Friday from New York City.

Former Arts student Isis Holt defied the odds to compete at the Tokyo Games, after taking a two-year hiatus from the sport. Holt contemplated a Tokyo campaign after graduating high school in 2019, with only a six-month window until the Opening Ceremony. The postponement of the Games was a welcomed surprise, with Isis trading in coaching sessions over Zoom for a spot at the Queensland Academy of Sport.

Holt entered the games on the back of a three-medal performance at Rio in 2016 and two world records at the 2019 World Champs. Holt continued her dominant run with two Silver medals across her staple T35 100m and 200m races, recording an Australian record time of 13.13 in the 100m, 0.30sec faster than her previous world record. Isis also set a new Oceania record for the T35 200m with 27.94, a time also faster than the previous world record.