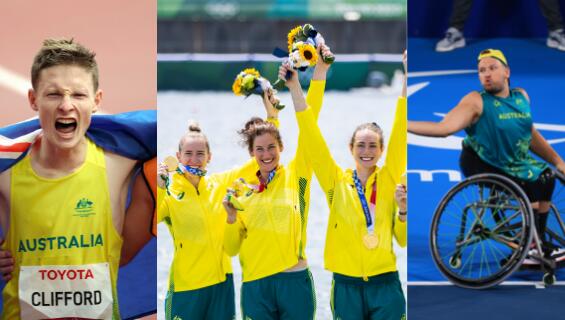 18 May; Originally posted by Victorian Institute of Sport

It was with great disappointment that the 2021 Award of Excellence scheduled for the 26 February 2022 was cancelled due to the coronavirus pandemic, but we are thrilled to finally reveal the winners of the 2021 Awards.

Each year the VIS award finalists and winners are selected by a judging panel consisting of VIS CEO and Board Members and again in 2021, Media Commentator Sam Lane joined the panel as an independent contributor.

For only the third time in our 31-year history, there were joint winners of the coveted Award of Excellence, with Tokyo gold medallists Dylan Alcott OAM and rowers Lucy Stephan OAM, Jessica Morrison OAM and Rosie Popa OAM (Women’s Four), sharing the honours.

The wheelchair tennis ace and well-recognised disability advocate, also became the first man in any form of tennis to win a Golden Slam – all four major titles and a Paralympic gold medal.

Alcott is the sixth VIS athlete to be named Award of Excellence winner for a second time, having also won in 2015. He was also awarded the 2021 Para Athlete Award, presented to the Para athlete who has achieved outstanding sporting results during the year, completed by demonstrable success in other areas of their life.

VIS athletes Lucy Stephan, Jessica Morrison and Rosie Popa were three of the four members that won gold in the Women’s Coxless Four event at the Tokyo Olympic Games.

The 2020 Games saw the return of the Women’s Four event to the Olympic rowing program after a 30-year absence. Australia topped the podium after narrowly holding off the Netherlands by less than half a second to win gold with a time of 6:15.37 — an Olympic record — while Ireland came third.

The 2XU Rising Star Award, which recognises the young athlete who has achieved outstanding sporting results during the year, complemented by success in other areas of their life, was awarded to Para-athletics sensation Jaryd Clifford.

Legally blind, the 22-year-old produced one of the most courageous campaigns of distance running by a Paralympian in Tokyo - winning a medal in each of his three events; silver in both the Marathon and the 5000m, and a bronze in the 1500m. At the time his devastation was palpable - gold eluded him - but he has since realised that disappointment and immense pride can coexist.

Away from the track, Jaryd is studying a Bachelor of Arts at the University of Melbourne and is a passionate advocate of the Paralympic movement.

The very special Sarah Tait Spirit Award recognises the athlete who most encompasses the spirit of the VIS. This athlete has demonstrated courage, commitment and persistence to achieve their sporting goals, whilst showing the ability to inspire and bring out the best in others, engage with and bring pride to their community. The award was renamed in 2016 in honour of the late Olympic rower.

Like the Award’s namesake, Smith is an inspiration in life as well as diving. The triple Olympian is one of the most giving athletes within the Australian sporting community and will always put her hand up to give back to her sport and the community in general to inspire the next generation of athletes and leaders.

Hidden beneath her bright, bubbly and unassuming demeanour, Smith is an extremely tough, gritty and resilient athlete. To be able to handle everything that has been thrown her way in the last two years, from cancelled events to several interstate relocations, has been nothing short of remarkable, and she always continues to do so with a positive mindset on life.

The Open Universities Australia Performance Lifestyle Award recognises the athlete who has achieved personal excellence in their studies, career ambitions, and/or work setting whilst pursuing their dual sporting career, epitomizing the VIS motto of ‘Success in Sport and Life’ and was awarded to Dr Elena Galiabovitch.

For the past 2 years Elena has been working on two frontlines - Dr Galiabovitch has been busy working on Melbourne's medical front line, caring for some of the most seriously ill COVID-19 patients. While as an elite athlete living in Victoria’s extended lockdowns, she was forced to adapt, and then re-adapt her training remotely, shooting via a simulator.

Despite the long training hours and unpredictable workload, Elena was rewarded with her second Olympic berth in Tokyo, where she competed in the women’s 10m Air Pistol and the 25m Pistol events.

She was also recognised for her frontline efforts, chosen by the IOC to carry the Olympic flag at the Opening Ceremony – an honour she describes as the “greatest in her sporting career”.