VNL to celebrate Pride Round 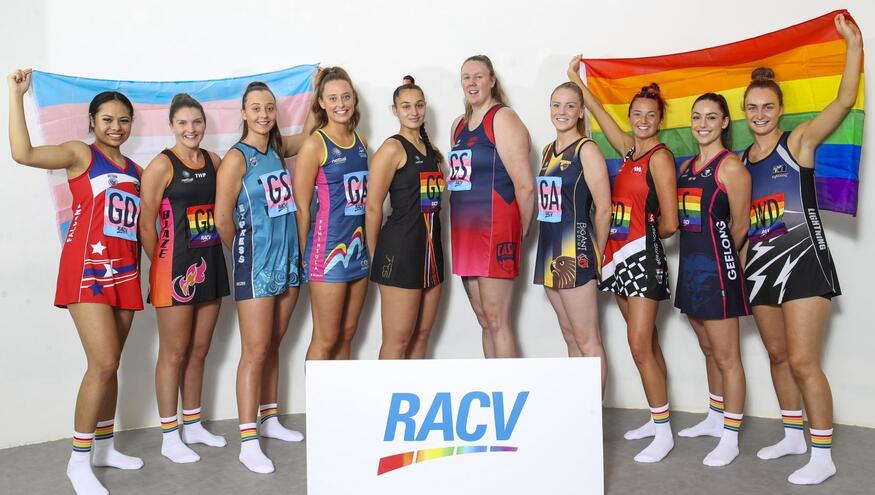 What started as an admirable one-club initiative by Melbourne University Lightning will on Wednesday night become a marvellous multi-coloured statement of inclusion and support for netball’s LGBTQIA+ community via round eight of the VNL, supported by RACV.

It all started five years ago, as the brainchild of long-time netball administrator Lindy Murphy, the Melbourne University Lightning Netball Club president since 2014.

Back then, on a small scale at first, Pride Round was born.

“Diversity and inclusion are cornerstones of the University of Melbourne’s culture,’’ Murphy says. “These principles are embedded throughout the university. As the first university to be a signatory to the ACON’s Pride in Sport Program, all MU sport clubs are encouraged to implement inclusive practices to ensure the safe and equal inclusion of LGBTQIA+ identifying people.

“We wanted to make sure that our netball community knew that we fully supported LGBTQIA+ inclusion in our sport. At times our language could have been more inclusive, and we needed to be more aware of the impact of our behaviours on all club members.’’

Murphy recalls seeing Melbourne Uni’s men’s football club play a leading role in creating awareness of the LGBTQIA+ community’s safe participation in sport back in 2015, which led to an invitation for a member to speak with netball’s player and parent group.

The result: a unanimous decision to run their own Pride Round in 2016, as an illustration of support and welcome.

“As a club, we have a responsibility to deliver programs that not only improve physical and mental wellbeing, but also provide leadership opportunities to influence change on important social issues,’’ Murphy says.

“We have a responsibility to drive the social inclusion agenda to raise aspirations among the equity priority groups such as the LGBTQIA+ and Gender Identifying groups.

"All people have the right to freely participate in sport, and benefit from the wellness it brings, regardless of their sexuality and gender identity. It’s our responsibility to provide a connectedness for young people to a community that embraces acceptance, empowerment and self-value. ”

The first step was to approach Netball Victoria to seek permission to make that small but symbolic opening statement during Pride Month in 2016.

Thus, there were rainbow-coloured bibs. A MUL coach-and-spectator dress-code that followed the same theme. Hair ribbons were supplied for opponents to join the celebration. One that was repeated for the next three years.

Then, before Covid ruined pretty much everything (well, other than the Vixens wonderful Suncorp Super Netball championship) in 2020, Netball Victoria agreed to allocate a full VNL round to mark Pride Week, involving every team.

So here we are. Ready, willing and preparing for a night of Netball Victoria-supplied bibs - half in rainbow-colours and the other half in transgender stripes to avoid confusion.

Umpires and players will be wearing white socks with rainbow stripes, and bench officials will be encouraged to wear bright colours.

The Lightning teams in each of Championship, Division 1 and 19/U grades will wear specially-designed Pride Round dresses with the usual white lightning bolt in rainbow hues; the club appreciative of the financial support supplied by the University of Melbourne that extends to the branded polo tops for coaches and committee members.

There will be bunting around the court and the score bench, as part of a branding and awareness exercise that no-one can mistake in a match against City West Falcons live streamed by Netball Victoria.

The initiative will extend to the two Melbourne University development teams that play in the Tuesday night competition at the State Netball Centre when competition resumes in July.

“A lot of clubs have since asked me ‘what obstacles did you face? How hard was it?’ It just was not hard at all. It’s been so embraced and it’s absolutely the right thing to do,’’ says Murphy.

So to Wednesday, when - to pinch and slightly modify a famous line from the great musician Paul Kelly - from little things, big(ger) things have grown.

“We’re really proud as a club that we’ve been able to ‘influence up’, and encourage Netball Victoria to take this on board and show their support for creating a safe place for members of LGTB+ community ,’’ says Murphy, who started as Netball Victoria’s junior development manager back in 1990, and whose project work with Netball Australia now involves pathway events and the roll out of the new scoring, timing and results platform for SSN.

“It’s about extending the awareness and continuing to send strong reminders to our community. It’s something that really has not been done in netball, and even at a national level, we don’t actively have a Pride Round. Sport impacts society and the way people live their lives. It is an important vehicle for providing leadership on important community issues.”